(That is the only Shakespeare reference I am making)

One of the areas in the fictional female character’s life that needs to be considered when trying to write, for lack of better terminology, a “strong female” is relationships. In the days of the damsels in distress, the only happy ending for female characters was a relationship. This, obviously, has some problems – especially in movies targeted at younger girls, like Disney movies.

When marriage is presented as the end goal in a female’s life in a story, and this story is presented to a younger audience including girls, these girls can grow up to believe that marriage – or relationships in general – should be their end goal. And this is how we end up with middle school girls – middle schoolers – who are so caught up in getting a boyfriend.

If there is a problem with this, then it needs to be fixed. This is a given. What’s less of a given is how to fix the problem.

One of the solutions is to go the complete opposite – the, for lack of better terminology, “strong female” doesn’t end up with anybody. She has complete independence. She doesn’t need anybody else in her life.

This solution has it’s own problems, though. For one, if every (for lack of better terminology) “strong female” character never ends up with anybody, than that can create the illusion that “strong females” (for lack of better terminology) in real life are lonely or un-date-able/unlovable. This, then, buys into the idea that girls should act dumb or stupid if they want to have a significant other.

The second problem with this is that a circulates the idea that to be a (for lack of better terminology) “strong female”, a girl must never rely on anybody, and this is dangerous. Real life humans usually end up relying on someone, though not always a lover, and the idea that someone should never need anybody can cause that someone to be stressed out or lonely. This leads into the third problem – complete independence is unrealistic, and can even break the suspension of belief.

The fourth problem is that real-life (*sigh*) “strong females” who are married or in a relationship might dislike a story that portrays relationships as a weakness in girls.

The other solution is to keep relationship in the picture, but still keep the female character “strong”.

(And yes, that is possible)

If written correctly, a female character can be in a relationship or even married and still be a well-written character that can be a positive role-model for girls (a-ha! Better terminology!). The best examples I can think of at the moment is Annabeth from Percy Jackson and the Olympians (or more specifically Heroes of Olympus, as she isn’t actually in a relationship in the first series yet), Gwen from Merlin, and Isi and Enna from The Books of Bayern by Shannon Hale. All four are in a relationship, but are never damsels in distress. In fact, Guinevere and Isi both marry during the story, and Enna’s marriage is one of the last scenes in the series.

There is still a problem, though. If every well-written female character that can be a positive role-model ends up in a relationship – especially for younger characters –  then it can still seem like a relationship is needed to be happy.

So the obvious solution to the problems of the above solutions is to include both – have an inspiring female character end up in a good relationship, and have a female character who stays single. 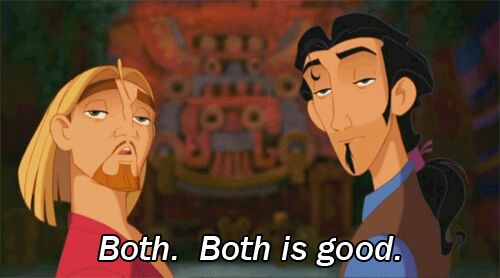 (And yes, it is possible to have two inspiring female characters in one story).

Featured image from a public domain website, found via Google

Picture above from the movie Road to El Dorado. Picture nor screenshot mine.

Why don’t I like the terminology “strong female”? I feel like that term can create one single image of what an ideal female character should be – instead of a diverse range of real-life characters with useful strengths and realistic flaws. Strong Female Isn’t a Personality has more on this subject.